My name is Ken Fried.

I am the son of Alan Fried and Sharon Roth.

My maternal grandparents emigrated to the US after spending the later years of WWII in a Nazi Labor Camp in Poland. My grandma was Polish and my grandfather German. My paternal lineage emigrated here in the 1800's and early 1900's from Ukraine and Russia. 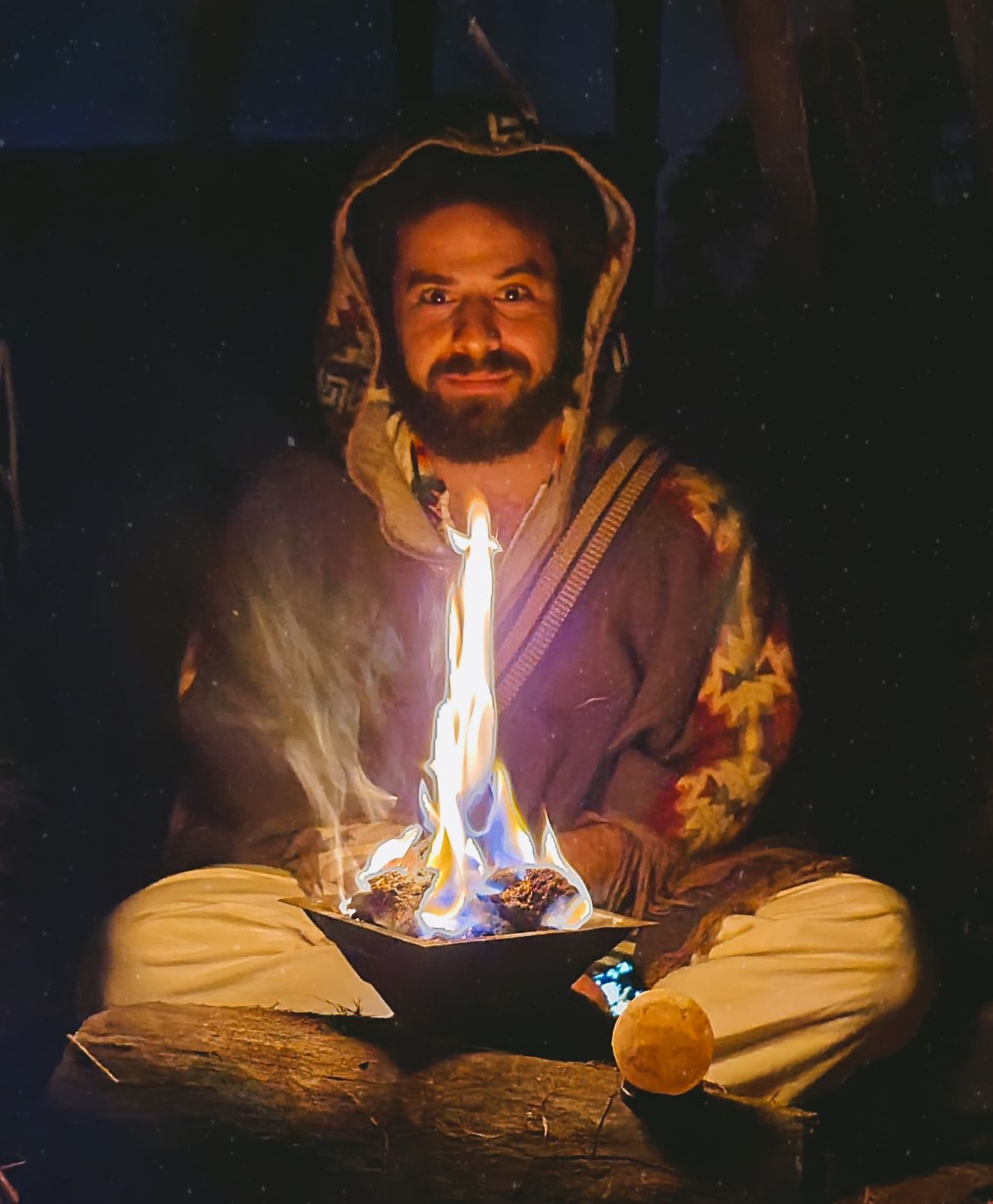 I was born and raised on the land once referred to as Seawanhacky or The Island of Shells, on the indigenous land of the Leni-Lenape. Today, this place is known as Long Island, New York.

I currently reside on the indigenous land of the Kumeyaay Tribe in the area known as San Diego, California. I offer my sincere and heartfelt gratitude to the living, the deceased, and the timeless spirits who steward the land where I was born, the lands I've lived upon, and the land where I dwell in present time.

I offer my gratitude to the birds, the bees, the mountains and trees. The great fire of life; the sun, and the sky, the waterfalls and the rivers that I'm still blessed to drink from. I honor the animals, the fauna, and all forms of earth, air, water, and fire.

I honor my first and last teacher, life.

What you're about to read is a chapter from the grander book of my life. With that, let's begin with school...

During junior high school I took an interest (and excelled) in math and science. As I progressed through middle school and into the early years of high school, I found myself reading books on the developing fields of quantum physics and string theory, as well as futurism, which was culturally relevant given the hype regarding the approaching new millenium.

This intellectual pursuit and curiosity led me to the budding—albeit mostly theoretical—world of nanotechnology.

In 1999, in the 9th grade, I enrolled in a four year science research program. In this program I studied the scientific method and how to research—and applied this to my interest in nanotechnology.

During this period of exploration I found myself gravitating towards the potential medical uses of carbon nanotubes—a form of carbon—for the storage and delivery of medications such as insulin, a subject which was decades ahead of its time.

My research of scientific literature led me to develop a research proposal, which coincidentally aligned with research efforts in the Chemistry Department at the Polytechnic University in Brooklyn, now known as the NYU Tandon School of Engineering. My proposal was accepted by the chair of the department and at 17 years old I began conducting research at the University.

I shared my research and findings in a technical paper, which I submitted to the Intel Science Competition in the fall of 2001.

In fall of 2002, I began my studies in the Engineering Department at Syracuse University.

During the summer entering into my junior year of college, I interned at the NASA Langley Research Center in the Mechanics and Durability Branch. While there, I participated in a research project studying the failure mechanics of thermo-cycled composite cryogenic fuel tanks. You can view the conference paper here.

During the summer entering into my senior year of college, I interned in the Manufacturing Research and Development Group at Boeing Aerospace in Wichita, Kansas. During my time there, I participated in research which supported the development of a process for the manufacturing of engine nacelles; the curved 'lip' structure on the front of jet engines.

In the spring of 2006, I graduated from Syracuse University with a Bachelor of Science in Mechanical Engineering. I chose to defer working and instead relocated to Haifa, Israel for six months.

I joined a team of graduate students at The Israel Institute of Technology, who were performing flight trials in preparation for an attempt to break the Guinness world record for the longest-duration unmanned flight.

Unfortunately my internship ended after one month, due to the 2006 war with Hezbollah. I spent the remainder of my time teaching english, traveling, and exploring the country.

In the winter of 2006/07, upon returning to the United States, I began working in Manufacturing Research and Development at Spirit AeroSystems, formerly Boeing AeroSpace, where I interned the summer prior.

At Spirit AeroSystems I worked on a variety of projects related to the development of processes and technologies for the manufacturing of carbon fiber composite structures for the Boeing 787 Dreamliner and Airbus A350XWB. Amongst other highlights, I was a co-inventor for a process which was patented.

Inherent to my externally focused career track was a fundamental neglect of—and disconnection from—the proverbial world within. In addition to the thoughts, feelings, emotions, and impulses, this world also included the actual organs, glands, and tissues of my body.

While I was driven—and had the passion, commitment, and discipline to achieve what I desired—such external focus came at the cost of my mental, emotional, and physical health.

In the winter of 2008/09 a personal health crisis brought me to my primary care physician, who, unbeknownst to him, offered me a choice.

To continue living as I had—and reap the grim consequences—or to sow new seeds and harvest different fruits.

I chose the latter...and in an instant everything was different.

In a few short months I completely reoriented myself to life—as opposed to death—overhauled my lifestyle, and in so doing radically upgraded my body, psyche, and the way I was showing up in the world.

Less than a year after this health crisis—in the spring of 2010—after three years working as an engineer, I resigned from my job and closed this professional, technically-oriented chapter of my career and life.

In my heart I'm still an R&D Engineer—and always will be.

I wish for the sake of conciseness that I could simply share in a chronological and linear fashion—like above—what's happened since quitting, but life has been anything but simple or linear. The truth is it's been messy, non-linear, and at times profoundly disorienting, chaotic, and uncertain; the math is complex.

In the past decade I've spent countless hours researching and studying a breadth of subjects. I've experimented and immersed myself in the living laboratory of life. Discovering and expanding my understanding of what it means to be human.

Learning and integrating through the trials and tribulations of direct experience how to be human...in this body...on this earth...in these times.

I am an engineer—and I am the product of my immersive research and development efforts.

As much as an acorn is in control of becoming an oak, I am in control of who I become. While I've made choices which nurture the soil of my dormant potential, ultimately, it is the spark of the divine within that continues to drive the excavation and expression of the living, breathing, somatic intelligence inherent to the body, the earth, and life itself.

I am who I was destined to be. Yesterday, today, and tomorrow.

Along the way, I've developed a unique capacity to support others to come to know this truth within themselves.

From Scientist to Alchemist...

In the years following my life reorientation, I've studied the art and science of detoxification and cellular regeneration, iridology, cleansing, fasting, herbalism, and Ayurveda.

I've studied and practiced a variety of spiritual traditions from Bhakti Yoga to Tantric Tibetan Buddhism, worked with psychedelics, and indigenous teachers.

The key here is that not only have I studied—and in certain instances trained informally or formally—but I've experimented on myself, unrelentingly, and have integrated and embodied the wisdom I carry through countless ordinary and non-ordinary direct experiences.

Before the age of eight I had two life-critical near death experiences and lived for most of my life unknowingly locked in a prison of severe mental and emotional anguish—and spiritual distress—due to the unresolved (and unconscious) traumatizing effects these experiences had on my psyche and identity structure.

I've dry fasted and fasted with water, juice, and fruits for days, weeks and months at a time, studied and tracked the effects of specific herbs on my physiology, apprenticed with teachers, assisted souls in transitioning from this plane, and guided others in accessing and navigating non-ordinary states of consciousness.

I've pulled the proverbial power cord on relationships and versions of life that were no longer congruent, consciously choosing to take the flamethrower to the seemingly safe and familiar internal and external structures of my life, when necessary.

I've loved, had my heart broken, suffered from depression, dark nights of the soul, been manipulated and deceived by those closest to me, bullied, arrested, and both emotionally and physically abused because of my religious upbringing, physical features, the clothes I wore, my dad's morbid obesity, and the cars my parents drove.

I navigated the rather messy divorce of my parents as best as a 16 year old could, which included having the police called on me multiple times. I've traveled abroad, lived out of my car, navigated the death of my dad, and the dismantling of my childhood home. I've explored the origins of shame, in this life, and the lives of my ancestors.

I've faced fear head on, unlocked my tender heart, reclaimed my power, and lovingly held the hearts of those navigating crisis, catharsis, and crossroads of all kinds. I've invested ten's of thousands' of dollars and thousands of hours to intensive and rigorous inner exploration and work to excavate my Self.

And the truth is, I've (always) only just begun. The landscape and spaces I want to explore exceeds my capacity to explore.

In closing, I am blessed and grateful to be alive.

I AM a miracle.

The miracle of life, embodied.

...and it would be my pleasure to support you in connecting with and to the miracle of life that is you.

"Ken Fried is a master coach who can transverse esoteric pathways of human existence from the depths of cellular chemistry, disease manifestation and human suffering — to the spiritual levels of the world’s most profound wisdom traditions. In his work with Seeing with Your Heart, Ken offered insights and guidance that blew open the doors of new possibilities."
—Dan Cohen, Co-Founder of Seeing With Your Heart